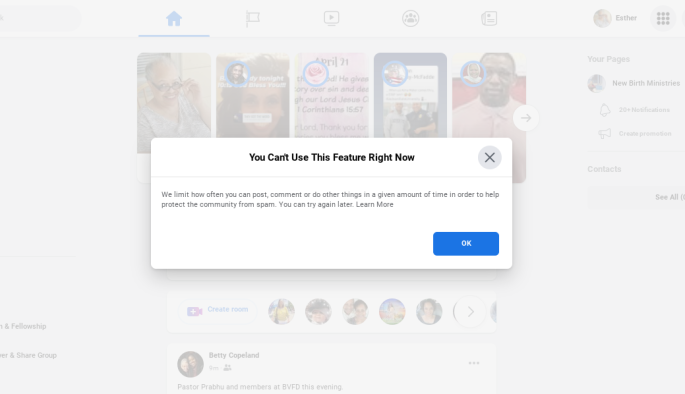 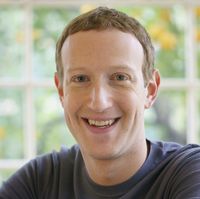 You took the checkmark away from my company making it looked like it was a false company, you keep asking me to boost a post that says that my post was false information, and I see the same 15 people every day. People talk about Facebook jail I never really understood what it was like to get out of it. I would really like to have the freedom of enjoying Facebook without getting corrected somehow. Not to mention that I’m not allowed to share the posts from my own business page. I also feel that there’s been an attack on Christian content. These things should not be. I like Facebook but Facebook is not my father God is. When I am restricted from talking about Christian matters that’s not a good place for me to be. I have no ought against you and I do wish you well but there are some things that need to be fixed.

To donate to my ministry

Your donations will help my ministry to get the Word of God throughout the World. Donate via Pay Pal or subscribe to my Podcast at http://www.anchor.fm/revessie/support And….thank you! Receipts sent for your Tax Purposes.  Deu 1:11  (The LORD God of your fathers make you a thousand times so many more as ye are, and bless you, as he hath promised you!)

I’ve been having odd feelings about Facebook for about a year or so now. I believe that someone is in the background, creating a newer version just as Mark Zuckerberg created a newer version of MySpace.

It’s down today and so is Instagram. There’s a reason. God is not going to allow it to take over His people and monitor everything that we say and correct us to it’s own liking (Ai.) I bind that monitoring spirit in Jesus mighty name.

To be a supporter of my ministry, for offerings, tithes, or donations, go to:  https://anchor.fm/revessie/support  Receipts sent for your Tax Purposes.  Deu 1:11  (The LORD God of your fathers make you a thousand times so many more as ye are, and bless you, as he hath promised you!) 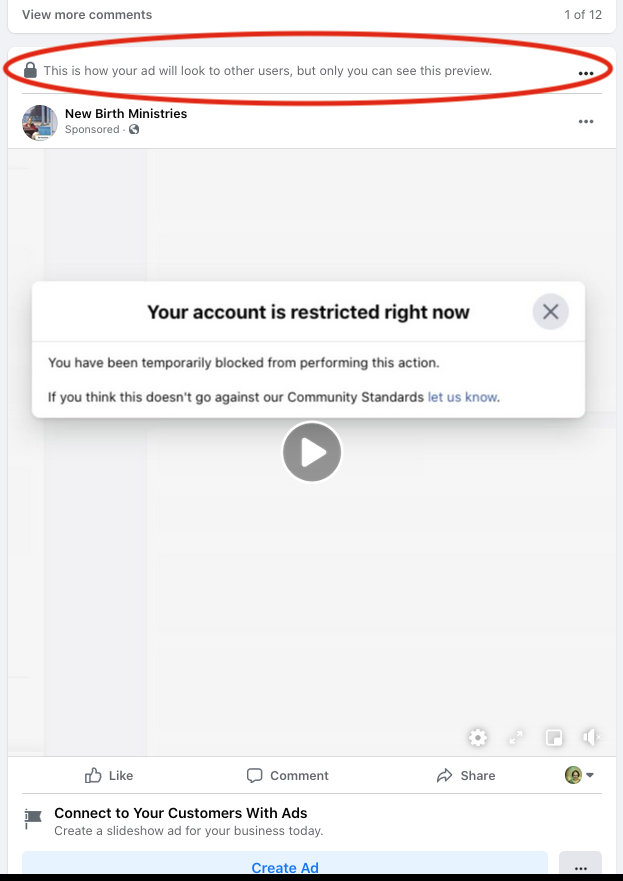 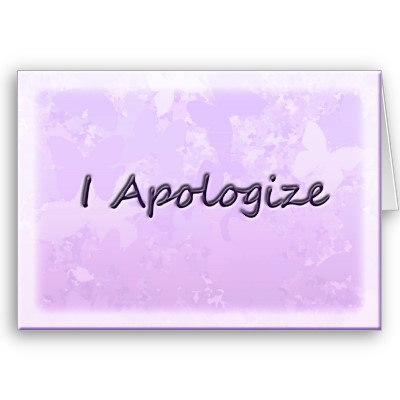 My “Haman” got embarrassed publicly. (Read the story in the bible about Queen Esther and Haman.) A preacher friend of mine told the actual owner of “The Town of Canonsburg” group on Facebook what one of the moderators did to me by kicking me out of the group ‘thinking’ that I had “stolen” one of his pictures of which I actually didn’t. It was strange. I’ve known this guy (the one who kicked me out) since we were young and he always did have a cocky and argumentative attitude but no one took him serious. He got on council and you couldn’t hit him in the behind with a red apple after that. That’s just what we DIDN’T need. I honestly don’t know how he got on council with his background but I’ll pass on that conversation and keep it to myself. People want to hear it while you are telling it and when the mess hits the fan, they’ll tell everyone that you told it.

A young black man from Canonsburg was in the newspaper for playing football for a professional team and I posted it in “Canonsburg Friends” Group which I was honored to be a moderator. I was very proud of the young Black Man as I am noted myself as the only black female listed in Canonsburg’s BiCentennial History Book as one of their well known singers among Perry Como, Bobby Vinton and Bobby Shawn (my BMF). I am honored y’all! God has been good to me. AND! We are all in the same chapter/section too! I give God all of the Glory.

The one moderator must have something against the 1st Canonsburg group, (Canonsburg Friends) and he got upset that I shared the picture there. I don’t understand it because I shared it from the Pittsburgh Press or something like that, just like everyone else did and he accused me of ‘stealing.’ It’s crazy because it’s the same hometown with these 2 groups right? So, last year sometime, I resigned from being Moderator on Canonsburg Friends, feeling that I had made too many mistakes while doing do. I felt horrible then. In our recent thread that went over until today, people are still commenting on it, it was even mentioned how it would be crazy for Hallmark who is sponsoring Canonsburg’s Christmases now, to find out that they are kicking preachers out of their group.

Anyway, the owner of the 2nd group, “The Town of Canonsburg” apologized and let me back in and my alleged “old friend from our youth” was mad. He messaged me on Messenger and tried to act like he was trying to be nice by letting me back in. It wasn’t him! It was my preacher friend and Rob, the owner. Lolol. There was a whole conversation thread going on about it online as people hadn’t known that this happened to me some time last year. I kept it quiet and gave it to God. People are now messaging me about the hard times that he is giving them and loved ones about things around town since he’s been on council. I received about 3 complaints in 1/2 hour.

If you read the book of Esther, you will see where she put her life on the line by asking her husband the King, who was Persian to save her people, the Jews. He didn’t even know that she was Jewish. There was an evil man named Haman who worked closely under the King and he wanted to kill the Jews. Esther revealed herself to the King to ask for a stay on his planned execution. He timing was bad but God’s timing was excellent. When she finally told the King, Haman laid down on the bed that she was in and begun to harass Queen Esther. He just knew that the King was going to change his heart and hate her too, but…..he didn’t. Instead the King glorified Esther’s Uncle who raised her, Mordecai and changed his decree to kill the Jews. Haman was, needless to say, heated. He was mad when he laid down with Esther but better still, the King was mad at evil Haman for doing what he did and making gallows for Esther’s Uncle to hang on therefore, the King arranged for Haman and his 10 sons to be hung publicly on ….. get this….. the Gallows that he had built for innocent Mordecai.

This is why I say that we should be still and let God fight our battles. It may seem like it takes a while but when He does it, He does it soooo well. Now, my Haman is being hung publicly for trying to hang me. Old folks used to say that if someone wants to make an a– out of themselves, let them do it by themselves. I believe that has happened. (Pardon the jargon.)

I am honestly just giving it to the Lord. The Lord God fought this battle for me and made it so that my ‘enemy’ is being displayed for his evil …. publicly. Amen.

Col 2:15 And having spoiled principalities and powers, he made a shew of them openly, triumphing over them in it. 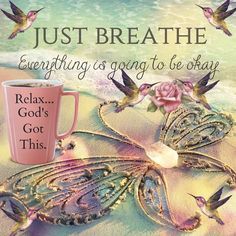 Good Morning! Did you experience heavy storms last night? I did here in Pittsburgh, Pa. where I live and they were pretty bad. I just laid in bed, prayed to my Father in Heaven, did what Jesus did, and commanded the storms to cease and they did. It’s not a miracle, it’s bible-sense. I thought I heard a train coming for a minute or two until I heard a ‘real’ train’s whistle blowing when it was all through. You know what the first one probably was right? I haven’t listened to the news yet, because I finally got a chance to sleep in but I am sure I will hear it when I get on Facebook. I always give God Glory and bless my friends first when I wake up in the morning and yes, I do it in bed before my feet hit the ground and running. And THEN I do it again sipping on my first cup of Folgers. 🙂

I plea the Blood of Jesus over your family and your entire household (friends and loved ones.) May you stay safe and always put it to mind that you are the righteousness of God and no weapon formed against you shall prosper. Amen. Revessie.

Psa 91:10  There shall no evil befall thee, neither shall any plague come nigh thy dwelling.